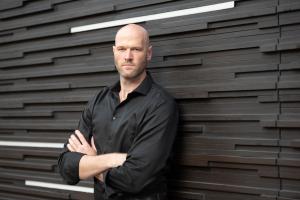 Zachary James will star in MAN OF LA MANCHA with Opera Saratoga.

The fully-staged outdoor production, part of the company’s 60th Anniversary season, will run July 8 through July 10, 2021.

MAN OF LA MANCHA, the Tony Award winning musical, features James in the role of Cervantes / Don Quixote. The production, directed and choreographed by Opera Saratoga’s Artistic and General Director Lawrence Edelson in full compliance with New York State COVID safety guidelines, will feature projection and lighting design by Barry Steele, costumes by Glenn Avery Breed, and will be conducted by Laura Bergquist – who most recently led the musical ALLEGIANCE on Broadway. The beloved musical, with a book by Dale Wasserman, music by Mitch Leigh, and lyrics by Joe Darion, was inspired by Miguel de Cervantes’ 17th Century masterpiece Don Quixote. A universal tale of love, hope, and adventure, MAN OF LA MANCHA celebrates the perseverance of one man who refuses to relinquish his ideals, and who is determined to see life not as it is, but as it ought to be. The celebrated score includes “The Impossible Dream,” “I, Don Quixote,” “Dulcinea,” “I Really Like Him,” “Little Bird,” and “To Each His Dulcinea.” Three performances are scheduled on the SPAC Amphitheater Stage on July 8th, 9th, and 10th at 8pm.

Zachary James, described as a “true stage animal” by Opera News, is an international opera, concert and cabaret singer, stage and screen actor, and recording artist. Zach was named as the BroadwayWorld 2010-2020 Vocalist and Performer of the Decade, the 2019 Breakout Opera Artist of the Year by Verismo Magazine, Most Innovative Opera Singer by The Classical Post and serves as an official ambassador for Opera America. He has appeared on Broadway (Lurch in the Original Broadway Cast of THE ADDAMS FAMILY, Thomas Hassinger in the Tony Award winning Original Broadway Revival Cast of SOUTH PACIFIC at Lincoln Center, and 2007’s National Theatre of London Broadway transfer, CORAM BOY), on television’s 30 Rock, Murphy Brown and Succession and on some of the world’s most acclaimed opera stages, including the Metropolitan Opera, English National Opera, Teatro Real, LA Opera, and more. Recently, Zach has released three full-length albums: Call Out, Zachary James on Broadway, and Exordium, all available wherever streaming music is played. More at zachjames.com.

Opera Saratoga is committed to ensuring that audiences have a safe and enjoyable experience this summer. All performances will be produced in compliance with New York State and CDC guidelines to ensure the health and safety of audience members, artists, and staff. As required by New York State, all ticket buyers will be required to show either proof of vaccination at least 14 days prior to their attendance, or a negative COVID-19 test within 72 hours of the performance they are attending. In addition, attendees will be required to complete a health screening questionnaire and pass a mandatory temperature check prior to entry. Audience members will be required to wear masks at all performances, regardless of vaccination status or proof of a negative test. Restrooms will be available with social distancing and enhanced cleaning and sanitation protocols in place in accordance with recommended guidelines.

Tickets for MAN OF LA MANCHA will go on sale for Opera Saratoga and SPAC Members on Monday, May 3rd; and to the general public on Monday, May 10th: Opera Saratoga Members should call 518.584.6018 for member priority tickets. SPAC Members should log in to their online account at www.tickets.spac.org for access to member priority tickets. As of May 10th, tickets will be available to the public online at www.spac.org.

Opera Saratoga, formerly known as Lake George Opera, began with a production of Die Fledermaus at the Diamond Point Theatre on July 5, 1962, playing to an audience of 230. The Company now calls Saratoga Springs home and performs for more than 25,000 people annually. Opera Saratoga celebrates its 60th Anniversary this season. The company serves the communities of Saratoga Springs, the Lower Adirondack and New York State Capital areas by providing access to world-class opera through the production of an annual Summer Festival, as well as year-round activities including extensive educational programs, mentorship of emerging operatic artists, and unique opportunities for the public to experience opera in both our home theater and non-traditional venues that leverage and embrace the unique cultural, historic, and natural resources of the area. To date, the company has performed 104 different fully staged works by 65 different composers, including 42 works by American composers and 14 premiere productions. In 2014, the Board of Directors appointed Lawrence Edelson Opera Saratoga’s Artistic and General Director. Edelson’s leadership has marked a new chapter in the company’s history, with increased emphasis on community partnerships throughout the year, diversification of the company’s repertoire, and a reaffirmed commitment to both the presentation of American works and the mentorship of emerging artists as core activities in the company’s programs each season. For more information, visit www.operasaratoga.org